The village population consists of around 450 adults and 100 children with a good mix of ages. Children attend local primary schools in either Keinton Mandeville or nearby Butleigh. Secondary age children have a choice of schools in Street, Castle Cary, or several independent schools. The village Hall is well used by pre-school morning classes, BP Scouts, (Beavers, Wolf Cubs and seniors), the History group, Table Tennis, Silvercise fitness class, whist and other ad hoc meetings. The village Hall and playing field are administered by a charity which is proactive in the organisation of several fundraising events each year. A sub-committee organises the highly successful and popular annual carnival. The village has facilities for several sports including football, cricket, tennis, table tennis,  croquet and walking football. There is also a playground for children. The village pub and skittle alley are well used, providing a wide range of regular entertainments. The village has recently got FTTC broadband. 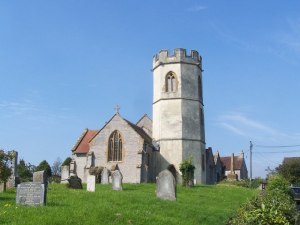 The 12th century church is a Grade II*listed building with an octagonal tower housing six bells of various dates. The bells, which have undergone a recent upgrade, are normally rung for major festivals and benefice services by the benefice bell ringing team. Funding from the millennium commission enabled the conversion of the South transept into a meeting room and the modernisation of the vestry with a cloakroom/toilet added. There is seating for about 70 on pews with additional seating available in the South transept.

The average congregation is around 15 and is in the over 60s age range – but are nevertheless active and flexible in attitude. Cleaning and flower arranging are carried out by a rota system which includes people who do not normally attend services. It is very much the village church and well supported by most people including those from other denominations. Fundraising includes various activities such as plant sales, barbecues, coffee mornings and a Lenten lunch which are well attended by churchgoers and non-churchgoers alike. There is a weekly lottery for 49 people that brings in a regular income. The villagers enjoy a harvest service followed by a village supper. The Carol service has a congregation of around 100 each year.

Although small, the atmosphere of the church (according to the Visitors book) is peaceful and welcoming. A churchyard which has been extended several times over the past years, surrounds the building. The majority of recent burials have taken place in the newest area to the south east.